Yesterday was the day I finally got around to making this homemade muesli/cereal from Bill Grangers book Bills Sydney Food. Most people know I’m pretty much in love with the bills chain of restaurants and the food that comes out of his kitchen. See here and here and here to see more about bills recipes. The decision to try out this muesli recipe came after I finally gave up my obsession with Just Right Cereal. What’s Just Right you’re asking? Only what was the best Australian cereal produced by Kellogg’s until the end of 2013. That’s when everything changed. Read on to learn more!

I don’t think there’s any way to tell this story without coming across as a little crazy about cereal so I’m not going to try to hold back. I am who I am and I can be eccentric about certain food items. Always have been and probably always will be. But this story has a happy and relatively healthy (of mind and body) ending.

So where to begin? I think it makes sense to start in Jan 2007. That’s when I moved over to NYC and quickly became horrified by the fact that the American cereal selection just did not match up with my tastes at all. Cereals containing a mix of apricots and sultanas that were “not too heavy and not too light” were nowhere to be seen. The horror! I scrunched up my face at Cinnamon Toast Crunch and refused to even try it. I tried some possible alternatives but was not satisfied at all. I even tried adding some chopped up dried apricots to a simpler cereal but it just wasn’t the same. Then I discovered simplyoz and would occasionally spoil myself with a bulk order of cereal that I would ration over the months. Of course, trips back to Australia over the years has always been accompanied by one big “shop” and return home with a suitcase full of the stuff. 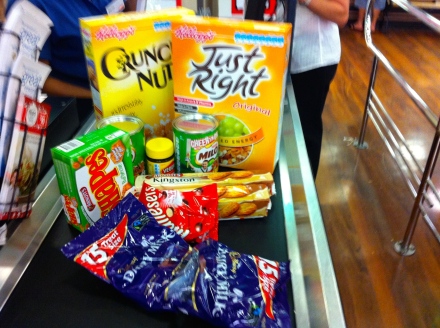 So what happened in Dec of 2013? Kellogg’s changed the recipe for Just Right! The apricot pieces were far more artificial and sickly sweet tasting. I couldn’t stomach the stuff anymore. As you can imagine this was quite traumatic. I spent most of 2014 contemplating what the next step should be. I felt like 8 months of mourning my cereal were probably sufficient. That’s when I finally realized that it was OK to make something that was different to the flavors and textures I knew but somehow in keeping with the spirit of the cereal I once loved.  I’m not sure if it makes sense but I think that maybe not having that flavor combination exist anymore made this realization possible?

Given that this was a bit of an experiment I decided to halve the original recipe, otherwise I would have ended up with 3 pounds of muesli that would need to be consumed over the period of 1 month!

I went ahead and melted some honey, butter and vanilla. Combined it with my dry muesli ingredients and began toasting in the oven 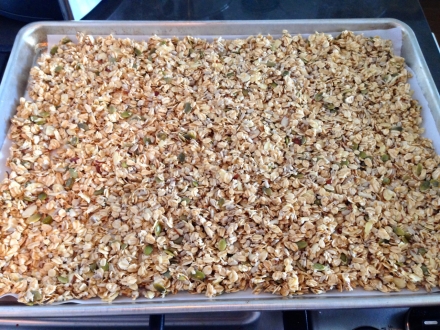 Once it was ready I took the muesli out of the oven, let it cool a little and stirred through my dried fruits of choice 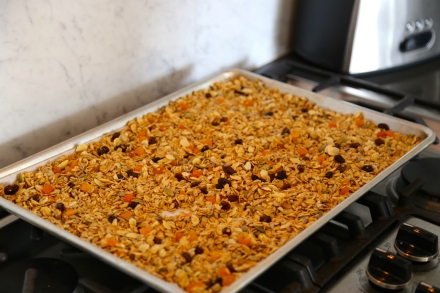 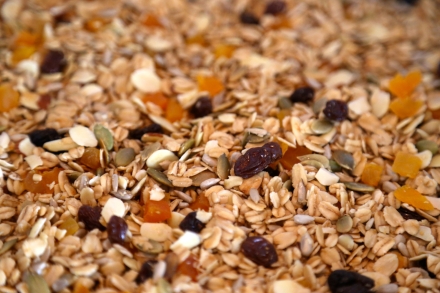 Once completely cool I transferred the muesli to an airtight container

What’s the verdict? I had some this morning with milk and it was quite tasty! As with many mueslis vs cereals, there’s a lot more chewing required. I know that sounds weird but you’ll know what I mean once you try it. I also have to admit it would be nice if there was a little more oomph to the recipe by way of sweet and salty. Maybe adding a little more honey or the addition of maple syrup? Maybe adding some sea salt at the end? Or maybe it’s best to leave things alone and let my body thank me 😉

The recipe below is a halved version of the original recipe.

2 thoughts on “Homemade Muesli with Apricots and Raisins”