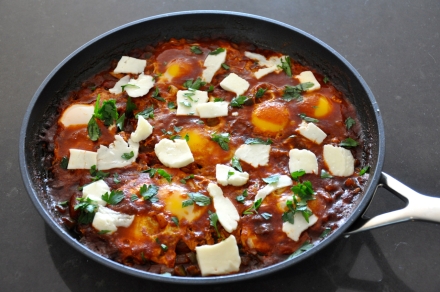 Shakshuka shakshuka shakshuka! People go crazy for it these days!!!  “What the heck is Shakshuka?” you might be asking. It’s a delicious tomatoey (sometimes spicy) Middle Eastern egg dish that’s become very popular in Middle East inspired restaurants. In Hebrew it means “all mixed up”. Growing up in an Israeli household I had my fair share of Shakshuka. Not so much for breakfast/brunch which is when most people eat it but more-so for dinner on the weekends. Let me explain. You see, my mom is a great cook. She’s famous for putting together complete dinners in 30 minutes. She calls it a “marathon dinner” although really it’s more of a sprint dinner when you think of it. But anyway, enough making fun of my ESL parents! Back to the story! Where was I? Oh yes, she’s a great cook! But one thing I remember growing up was that she hated cooking on the weekends. The weekends were her days off, a time to relax especially on Sundays. Sunday dinner usually meant leftovers, Chinese take out, sometimes pizza and sometimes – not always, but sometimes – she would make us Shakshuka. Eggs for dinner? Why not! I have to warn you that what I prepared in my most recent Shakshuka culinary escapade is not quite like what we ate at home. We didn’t have a huge amount of spicy food growing up so it’s no wonder that the SmittenKitchen recipe I adapted (insert Haloumi cheese) has got a lot more kick to it.

I have to admit that I did take a break from this egg dish for a while. It’s not that I didn’t like my mothers version of the dish. I just didn’t really appreciate it all that much. Once you bucket something into the category of a fast quick meal you just don’t think it’s all that special. Maybe it was also a case of having too much of a good thing? Insert a couple years break. After moving out of home but still living in Sydney I tried to make it with an improvised recipe. Let’s just say it was edible but not great. Insert another Shakshuka break. Fast forward a few more years to 2007 and here we were in NYC where we’d heard about this great restaurant called The Hummus Place. “You have to try it! All they serve is hummus!”, people would say. That’s not quite true. Lots of yummy Israeli food is served there such as Hummus, Felafel and OF COURSE Shakshuka. “Wow”, I thought. “This is unlike any other Shakshuka I’ve ever tasted.” First of all it was served to the table in the skillet it was prepared in. It was spicy but not too spicy and the eggs were a little runnier than I was used to, poached to perfection! Oh and there were options for the dish! You could have it with or without Haloumi cheese. I would always get it without Haloumi and my husband would get it with Haloumi. I still remember saying to people “Well, that’s not how my mom made it so I don’t want to spoil my memory of it.” Sometimes I should really slap myself! The addition of Haloumi is delicious. But more on that shortly. So on and on the years went. Frequent visits to the east village Hummus Place restaurant were made and many an egg dish were consumed. I still never really thought about making it myself until two things happened:

Ok, so maybe the world didn’t go completely crazy but I definitely noticed the dish popping up in more restaurants (e.g. Meme in the west village) and many a blog post were appearing discussing how delicious this dish was and just how to make it. Oh and one more thing happened recently. I had an abundance of eggs in my refrigerator. That was mainly due to my over excitement at making ice cream. Let’s just say I got a little ahead of myself there and needed to take a break from making ice cream after so many ice cream creations had been attempted. Therefore, many many eggs.

Side note – If you’re in Australia (specifically Sydney) and want to satisfy your Shakshuka craving you should definitely check out these places:

Now back to preparing Shakshuka. I basically followed Deb Perelman’s recipe on smittenkitchen almost to the letter. I opted for 3 Jalapenos and substituted Feta cheese for Haloumi cheese. An Homage to The Hummus Place I suppose. I kind of disagree with the portion size labeled on the recipe. Deb says it serves 4-6 people. I say it serves 2-3 people where each person would ideally get 2-3 eggs. Cooking the dish took a little longer for me the first time since I had some technical difficulties (more on that later) but the finished product was amazing! Delicious! Perfect! The Haloumi could have been cooked a touch longer with the eggs instead of just added on at the end but apart from that I wouldn’t have changed a thing. The cheese really does make a difference. Works really well against the spicy sauce. If you can’t find Haloumi I’m sure the Feta would work really well too.

So here’s the steps to making Shakshuka:

Prepare all your ingredients. Chop up onions, jalapenos etc. By the way, is it normal for your hand to feel like it’s burning up after handling Jalapenos? Maybe I did something wrong when deseeding it but I’ve never had that happen when handling other chiles… WEIRD! 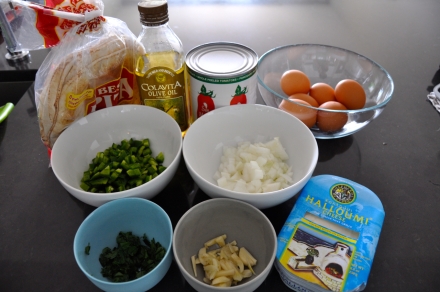 Then you cook your chiles and onions – I love my Le Creuset 12 inch frying pan for this job. Very pleased with that impulse post Christmas purchase. The quality and looks are great. It’s even dishwasher safe although cleaning it in the sink has been a breeze so far so dishwasher hasn’t been necessary. But good to know that’s an option! 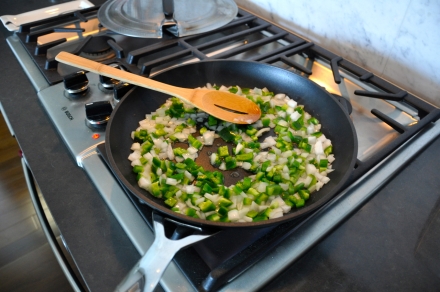 Then you add your garlic and spices.

Continue cooking for a little longer

Time to add the tomatoes and some water! I had to mash down the tomatoes a little more once in the frying pan. Next time I’ll make sure they are well squished before adding to the pan.

Time to add the eggs and then cover.

Oh yes. There were some technical difficulties. The photo below is a splatter cover with a smaller saucepan lid on top. I have since ordered an appropriately fitting lid for my frying pan.

Finally I topped the cooked eggs with Haloumi cheese and some chopped flat leaf parsley. I served with some warm Pita bread and then NUM NUM NUM!

Recipe – Not My Mothers Shakshuka (based on Shakshuka from SmittenKitchen.com)

Heat oil in a 12-inch frying pan over medium-high heat. Add chiles and onions and cook, stirring occasionally, until soft and golden brown, about 6 minutes. Add sliced garlic, cumin, and paprika, and cook, stirring frequently, until the garlic is soft, about 2 more minutes.

Crack eggs over sauce so that eggs are evenly distributed across sauce’s surface. Cover skillet and cook until yolks are just set, about 5 minutes. Using a spoon, baste the whites of the eggs with tomato mixture, being careful not to disturb the yolk. Sprinkle shakshuka with haloumi and parsley and serve with pitas, for dipping.

2 thoughts on “Not My Mother’s Shakshuka with Haloumi Cheese”